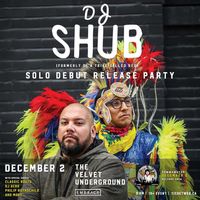 Tickets on sale Saturday, October 22 at 10 am via http://tktwb.tw/2e1VvSY, Rotate This & Soundscapes

About DJ Shub: DJ Shub, formerly of A Tribe Called Red, is a title earning DJ and award winning music producer. He lives in Fort Erie, Ontario and counts two DMC Canada DJ Championship titles (2007 and 2008), a DMC Canadian Battle for Supremacy title (2008), a Canadian Red Bull Thre3style title (2012), and a King of the Dot Canada vs. USA DJ battle win along with trophies from the JUNO Awards and the Aboriginal Peoples Choice Music Awards as some of his most notable accomplishments.